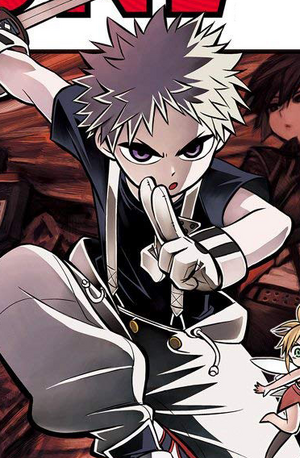 Chapter 1
Koyukimaru (小雪丸, Koyukimaru) is a ninja who came with his father, Yukimaru, in Wizard City to deliver the Scroll of Disaster.

Koyukimaru appears as a young boy of medium build. He has spiky silver-white hair and dark blue eyes. Before receiving his current outfit, he wore a ninja garb with vambraces and a mask covering his mouth and nose. After being tortured for information, all that is left of his original outfit are a pair of tattered pants. He now wears a navy blue t-shirt, white baggy overalls, white gloves with skull designs on them, and red, blue, and white skater shoes. He is usually seen with his Katana sheathed horizontally across the back of his hips when not in combat.

Koyukimaru keeps a composed demeanour, likely due to his ninja training, and does not openly express his emotions. He is suspicious of most people and does not trust others easily unless they prove they can be trusted first. He is quick to draw his Katana when he feels endangered. He does pay respect to those that treat him well.

Community content is available under CC-BY-SA unless otherwise noted.
Advertisement